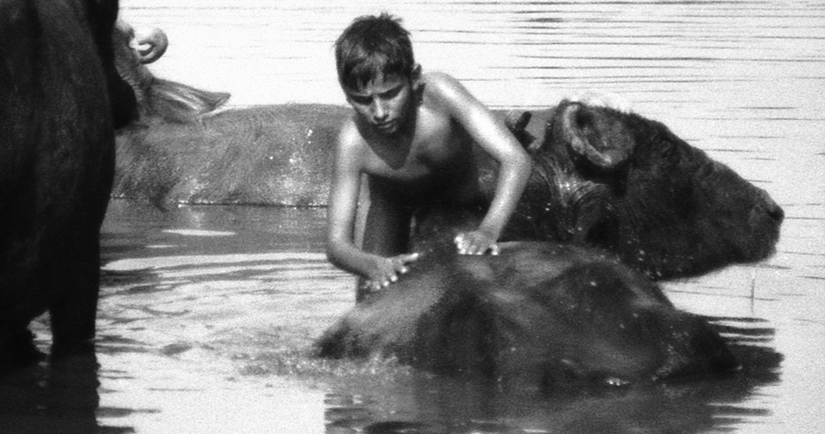 As a little boy in Lahore, I saw buffalos for the first time. They were strange animals, neither cow nor goat. To me they were like elephants without trunks. I was fascinated by them. I loved watching them wade in the water for hours. I would watch the young farmers accompany them, pamper them and clean them. The buffalos were the farmer’s pets, friends that they could whisper to. At times farmer and buffalo would swim together and the farmer’s wet clothes would cling to their bodies. I loved the buffalo and their young farmers.

I knew that mozzarella de bufala is made from the milk of the buffalo. What I didn’t know was that, the Buffalos were *imported from India. I was very excited to visit one of the farms in Naples. Half expecting to see Italian farmers with wet clothes and rippling muscles, I was surprised to see that the men attending the buffalos were imported from India too. “Hey when did you arrive?”
“Only two days ago.”
“The smell of your earth must still be fresh in your nostrils. No time to feel homesick yet eh!?”
“Have you found a good accommodation?”
“Yes the hotel is quite comfortable.”
“Have you found a job yet? There are many more farms, we will put a good word in for you.”

As we spoke the same language, they thought surely I must have come seeking the same dream as themselves!

Over four hundred sad-eyed beasts, with no ponds to swim in, suction cups attached to their udders, carrying away their milk. The precious buffalo milk, essential ingredient to the secret recipes that are passed on from generation to generation. These recipes of success bring money – money that allows families to continue farming, money to pay immigrants, who then forward it on to their families many oceans away. So far from home, like the buffalos, the migrant workers are just money making machines. It is all a chain of love, of sacrifice, all in the name of love.

The above is an extract from Journeys of Love and More Love,  a live film and performance installation with edible interludes. A co-production with Napoli Teatro Festival and motiroti,  stories of migration and displacement unfolded, with ‘love’ as the driving force that allows questions to be asked and connections to be made. By fusing my own experience with the life of people living in Naples, it opened wider questions about identity and the sense of belonging in a world where things are constantly on the move – an incessant fluctuation between being a guest and being at home.

Making the most out of time afforded by the lockdown, I have been busy scanning and digitally restoring some of my photographic archives. I re-lived one of my trips to the banks of river Ravi, back in ’83 while studying at NCA. The boy and his buffalos stood out as a beautiful example of belonging, living in empathy and in love with the animals. The gujjars and gawalas (dairymen) are traditionally the nomadic tribes from Indo-Pak, and make their living from selling milk. Till the ’70’s their small clans could be found within most cities, grazing their animals, and setting up temporary corrals. Our local gawala (doodh wala) came each day on his bicycle to deliver fresh milk. Urbanisation grew, times changed, gawalas were moved further away from built areas but still delivered on the door – on motorbikes; fitted with impressive ten gallon caldrons on each side. Exponential growth of the cities has squeezed them out. Small families working independently with a handful of animals are now working under bigger syndicates, with massive livestock, pushed along the river where lights of Lahore don’t reach. Many of the animals are now ill-fated to wallow in their own excrement in concreted dairy farms unaware of what fields look like. I can’t help but wonder if this boy’s children will ever give names to their pet buffalos, or impulsively splash around in Ravi, for the river lies parched. To witness the bonding between the boy and his buffalos, how far out will I need to travel?